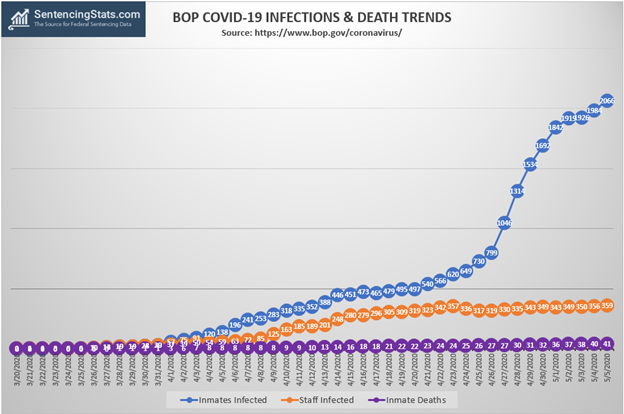 These four charts provide a visualization of the spread of the coronavirus within BOP facilities based on the latest available data published by the BOP and other sources as of 8:30 EDT, Tuesday, May 5, 2020. These charts also provide some important comparisons to contextualize the growth of the virus within the BOP.

The first chart below illustrates the decrease in the inmate population at BOP institutions and RRCs since mid-April.  The population has dropped by nearly 3,000 as more inmates are being released early either at the direction of the Attorney General or by court-ordered compassionate release with less defendants reporting to prison.  Despite the significant drop in inmate population, the number of inmates who are actively infected (meaning they have not recovered or died) has increased by over 1,000 during the same period of time.

The third chart illustrates the growth of the infection in both inmates and staff separately, as well as the number of deaths of inmates.  No deaths of staff have been reported as of yet.

Finally, the fourth chart illustrates the relative proportion of infected for various select countries.  The United States currently has the second highest rate of active infections worldwide at 294.83 per 100,000 population, second only to Singapore at 316.97 per 100,000.  If the BOP was a country, it would have the highest proportion of infected in the world by far at 890.98 per 100,000, which is nearly three times the rate of the United States.  That is especially remarkable considering that the BOP is only at Day 46 of its infection, whereas the United States is at Day 104.